Bad City is on the edge of falling into the hands of a madman, you dig? A strange and funky new party drug is killing kids left and right and that jive-ass, crooked city councillor Dominic Kincaid is behind it all.

After murdering the mayor, Kincaid has his sights set on taking over and running the city his way, the bad way. Thankfully, the one and only superfly Detective Franky New Guinea and his new partner, the truly unruly Detective Reverend Grizzly Night-Bear, are here to make sure that Bad City stays groovy and is run the good way: the BAD way (it’s different from the first bad way, and better). So get ready to boogie, cats, ’cause these cops are outta sight like dy-no-mite and the only thing they love more than sex, drugs, and growing body hair is taking down turkeys like Kincaid who threaten their BAD CITY. 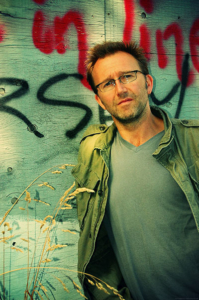 Aesthetically, I wanted to emulate the static and sometimes stage-y look of Blaxploitation films…Carl Bessai, Director

BAD CITY is a vintage 70’s cop comedy that borrows its vision from classic films like SuperFly, Black Samson, Trouble Man and many other Blaxploitation narratives. These films all had key elements in common: outrageous style, attitude and irreverent characters that were moral and amoral at the same time – never afraid to kick some ass, never afraid to make it with the ladies. In the spirit of these insanely bad, over the top movies comes ‘Bad City’. Structured as a classic cop buddy movie, the film brings two very different cops together as reluctant partners who must learn from eachother and join forces to bring down the man who is bringing down the city. The cast of characters features Detective Franky New Guinea, a latino playboy who channels a bit of John Travolta back in the day, and Detective Reverend Grizzly Night Bear – a Northern Canadian Serpico who channels his native spirituality to great heights. Both are pitted against a slimy mayor, Dominic Kincaid, whose pretenses toward educating the youth are exposed by our heroes as nothing more than a front for moving drugs into the city’s schools. Beneath the surface of this crazy, broad, comedic endeavor is a moral message about partnership, brotherhood, faith and family that transcends the genre and gives the film its heart.

Aesthetically, I wanted to emulate the static and sometimes stage-y look of Blaxploitation films, which often feature unintentional errors in continuity, a stage-y almost theatrical shooting style and variations of over-acting. Although each performance in this film is guided by authenticity and the powers of a committed actor, there is a broadness to each character that gives the film a flavor of Mel Brooks films or the Naked Gun films – where jokes fly out of characters in an absurd way, whether verbal or situational, causing an awesome juxtaposition between the seriousness of situations and the absurdity of the people in those situations. I also feel the film channels the contemporary cop buddy comedy The Other Guys in its classic presentation of two very different cops, with two very distinct styles who have to overcome their hatred of one another in order to really solve the crime.

I shot this film with uncharacteristically long takes and a blocking style that was more akin to a theatre play than a film.  This has given the material a wonderful ‘staged’ quality and allowed us to shoot large scenes in a choreographed style that is always flowing, always in motion when the camera remains static.  I also took full advantage of the vintage 70’s lenses that were provided for the film, including a remarkable zoom lense that gave me plenty of opportunity to crash zoom, feather zoom and sometimes just plain awkward zoom for emotional or comedic effect.  The zoom lense was definitely the tool of the seventies and there is no shortage of it in ‘Bad City’.